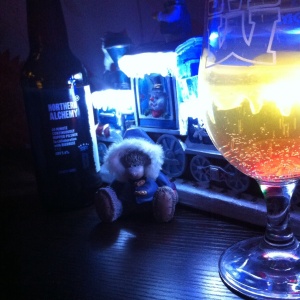 Last night I stood, as I often do, listening to the Beer O’Clock Show podcast whilst cooking. This podcast was abit different as I’d actually watched it live on the previous Monday night. So you’d think that there’d be no surprises. But somehow I missed the announcement of the beer for their 100th show, namely the Siren/Mikkeller colab Daydream. So I decided to drop that beer from my line up.

Just so happened that I was in town today whilst the lads from Northern Alchemy brewery were having a wee taster session in Mmmmm…. Glug….. in the Granger market. So I popped in there on my way to watch the match. Wish I’d bloody stayed there! Footy was rubbish but their beers were tremendous!

So tonight’s beer was the 60 minute continuously hopped pilsner. There’s abit of a fashion for heavily hopped lagers at the minute so I was keen to see how this stood up against the likes of Camdens IHL.

Northern Alchemy are a relatively new brewery but are making a real name for themselves on Tyneside from their base by the Cumberland Arms. They have genuinely innovative beers which aren’t always everyone’s cup of tea but they’re brilliantly executed. Funny thing is they’re expanding. They currently operate out of a metal transport container and in order to expand have ordered…….yes another transport container. Why the hell not, it works for them!

So first the aroma, citrus hops, you’d think this was an American IPA. It’s a great setting for the hops too. There’s sweet malt backing it up and the final fling is the crisp dryness that you’d expect from a pilsner. But that’s the only sign that it’s a pilsner. I think I love it because of the hop/malt balance in the initial flavour. I’d be more than happy with that in any IPA. Question is does it need that pilsner edge? Maybe if I was coming at this from a pilsner drinking background I’d feel different.

It’s another very well executed beer from these lads. Those hops are tremendous and I’ve thoroughly enjoyed it. My reservations about the style aside, it’s a good quality beer from a brewery that I will continue to keep an eye on. Keep up the good work lads!!