Here’s the first of my beer reviews and I’ve picked a particularly special beer for it.  I cracked this open on National Stout Day and was very pleased with my choice.

Beer Geek Brunch Weasel is an Imperial Oatmeal Stout made from one of the worlds most expensive coffees (made from cat droppings?!).  As soon as you open the bottle you get the roasty, coffee aroma, I got hints of treacle too and it just smells delicious.

Its thick, black, dense and dark, no light getting through this bad boy in the glass.  No head whatsoever and just a fe

w beads of carbonation leaving a slight wisp on the surface.

First taste is everything the aroma promises, roasted malt, deliciously strong coffee flavour slight carbonation, then  the oatmeal comes through finally finishing with the sweet smooth malts and overall booziness.  this beer is thick and silky on the tongue which is the quality I love most about Imperial Stouts.  A real top quality beer, loved it. 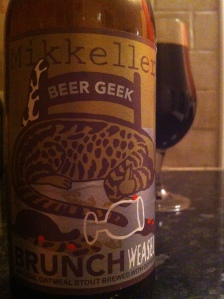 Sunday night, the missus is watching Downton Abbey while I read up on fermentables and drinking Brewdog Punk IPA got me thinking……

There’s a beer for that, is the new ‘catchy’ new slogan for erm….. well beer I suppose. The UK’s largest operators in the beer industry have all contributed towards this £10m campaign, the aims of which appear to be to get people to try beer generally, aiming at those who don’t currently drink beer in an attempt to grow the customer base for them to pitch to. Extrapolating further, I’m trying to think of the scenarios that this campaign is likely to try and influence. Not too long ago, my wife and I would have bought a bottle of wine to drink with a meal on a Friday or Saturday night but these days my wife knows that I’ll want to have a craft beer of some sort, so instead of opening a full bottle of wine for herself, she prefers to buy a fruit beer or a cider of some description. That’s driven by my love of beer, which has led to her trying new fruit beers which she would never have considered buying in the past.

The campaign is being funded to the tune of £10m which is a vast amount of money but even still it’s easy to brush off as being a drop in the ocean to the large companies involved. But again, give it context. This may well be a drop in the ocean but as these are businesses first and foremost the person responsible for signing off on the expenditure will have to explain the commercial business case for the spend. So assume that this wasn’t just cash sat in a bank account waiting for someone to spend it, this money will have come out of some budget, most likely advertising. Here’s where it gets interesting. These companies have elected to spend some of the money they normally spend advertising their own individual brands, on pushing the more general product that they sell a version of. That’s quite a shift. In this set up they are no longer trying to compete for market share, they are pooling a small proportion of their resources to try and grow the market to increase the value of their share.

Next think about the individual companies involved here. Each brand that they represent is a distinct beer, everyone knows John Smiths is a bitter, Fosters is a lager and Guinness is a stout. These companies have spent years and years building those brands and the advertising has been aimed at making those brands aspirational in some way. Guinness may have sullied what a true stout is but you have to say their advertising campaigns have been some of the best received brand building campaigns I’ve ever seen.

Note here though that as the breweries have been acquired by the larger industry operators, they’ve become a distinct beer type to fit their portfolio. So the advertising for that individual beer (often known by the name of its brewery), has been aimed at one particular demographic with the ultimate goal of having brand loyalty. They want consumers to go into a pub and see their favourite brand of beer on the bar and buy it every single time its there.

Now think about how these companies are meant to cope with the shift in the market driven by the growth of craft beer demand. There’s an explosion of new tastes and a huge variety of beer styles now and that consumer led interest in drinking a variety of beers is a totally new phenomena. The new craft breweries are seeing their brand loyalty increase due to the quality of their range of beers, but the big established companies have seen their market share dwindle as their customers try new flavours and that has had a major impact on their commercial growth. Ultimately growth is what the biggest city investors want to see. If you take the simplistic view that share prices are a reflection the future profitability, then growth is the indicator that the large corporate investors look for. Here share price increases are more desirable than dividends.

So I’ve given the new campaign some thought, I didn’t want to just dismiss it without exploring it and giving it context. But look at where my thought process took me, not once have I mentioned that the quality of the beers they produce is going to improve. Quite the opposite really if you take the natural link that for their existing profits to grow they need more new customers in the market rather than trying to win back some the former customers who have progressed onto better things.

Is this the big boys rallying against the rise of craft beer? I actually don’t think it is. I don’t think craft beer drinkers are meant to be enticed by this campaign, so therefore they’re not seeking to win back sales lost to the young upstarts. £10m spent and it all just feels quite cheap and hollow to me. I can’t help thinking that ‘There’s a beer for that’ is aimed at ‘we buy any beer.com’ style punters where the lack of quality isn’t seen as a drawback. £10m would create a pretty spectacular range of quality beers and perhaps my biggest disappointment is that they chose not to work on improving beer quality but instead chose to target less knowledgeable drinkers.

I would love to see how much the beer industry could grow if the likes of Magic Rock, Beavertown, Brewdog, Thornbridge had £10m to spend on increasing production, never mind advertising. Actually, if I ever win the euromillions I might just let them do that.